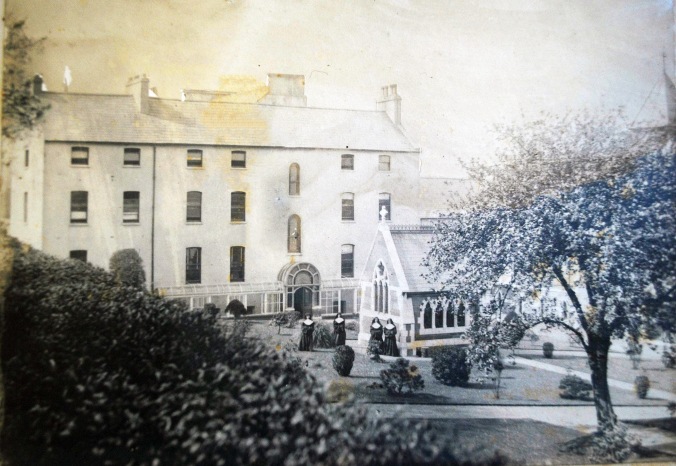 ‘”I am building a house”: Nano Nagle’s Georgian Convents’ was written by Jessie Castle and I after completing research for the Heritage Centre at Nano Nagle Place in Cork. It was apparent that very little had been written about the two convents that Nano built in the 1770s for the Ursuline and Presentation Sisters. Given her very close (and enthusiastic) involvement in these projects (and the fact that almost nothing had been written about Irish convent architecture) we decided to write about the convents using information from Nano Nagle’s letters, the Annals and Account Books of both convents alongside the physical evidence from the convent she built in 1771 and other sources including newspapers and photographs. In telling the story of the two convents we’re not just telling a story of bricks and mortar, but one of the determination and resilience of Nano Nagle as she strove to realise her dream of improving life for poor Catholic children in Cork and providing a safe home for both Ursuline and Presentation Sisters. In doing so she defied the Penal Laws, many local Protestants and, at times, even the Catholic hierarchy. Her achievement is really quite exceptional.

Following on from writing about the convents built in the 1770s Jessie and I are continuing our research and focusing at the moment on the convents that were built in Ireland prior to Catholic Emancipation in 1829 (over time we hope to expand the project to include later convents). We have visited some of the earliest convents, and hope to visit more in the future in order to record the buildings and gardens  – those aspects of Irish architectural and landscape history that have been most overlooked. We are very interested in hearing from anyone who has photos or memories of pre-1830 convents in Ireland as many of these have been demolished, or are no longer in use as convents. We have also realised that Nano Nagle wasn’t the only ‘sister builder’ (a term borrowed from Ellen Skerrett and Rima Lunin Schultz) and other women were involved in the design and building of the convents – for example Sr Magdalen Sargent in Clonmel and Sr Baptist Frayne in Wexford. If anyone knows of other remarkable Sisters who were involved in the building and design of the convents (from any period) we would be very interested in hearing those stories.

I can be contacted by email at g.p.obrien@ljmu.ac.uk or via this website.